skip to Main Content
BEST IN SHOW – VENDOR – DevLearn 2021!  Evolve’s Taco Builder Game, in collaboration with The Select Group and Rusty Taco, was peer voted as the Best of Show Vendor at DemoFest – DevLearn 2021.

CASE STUDY:  The Rusty Taco – Taco Builder was custom designed and developed as part of a blended learning strategy to meet the needs of new hire and tenured restaurant staff.

Our team documented the recipe steps, designed the visual layout to simulate the cold and hot stations, and then created individual recipe ingredient graphics. The components were then assembled and developed in Articulate Storyline.

The finished product was published to SCORM 2004 and made available via the company LMS.

ABOUT DemoFest: DemoFest is a showcase of selected eLearning innovation from conference participants at DevLearn, an annual learning and development conference put on by The Learning Guild. 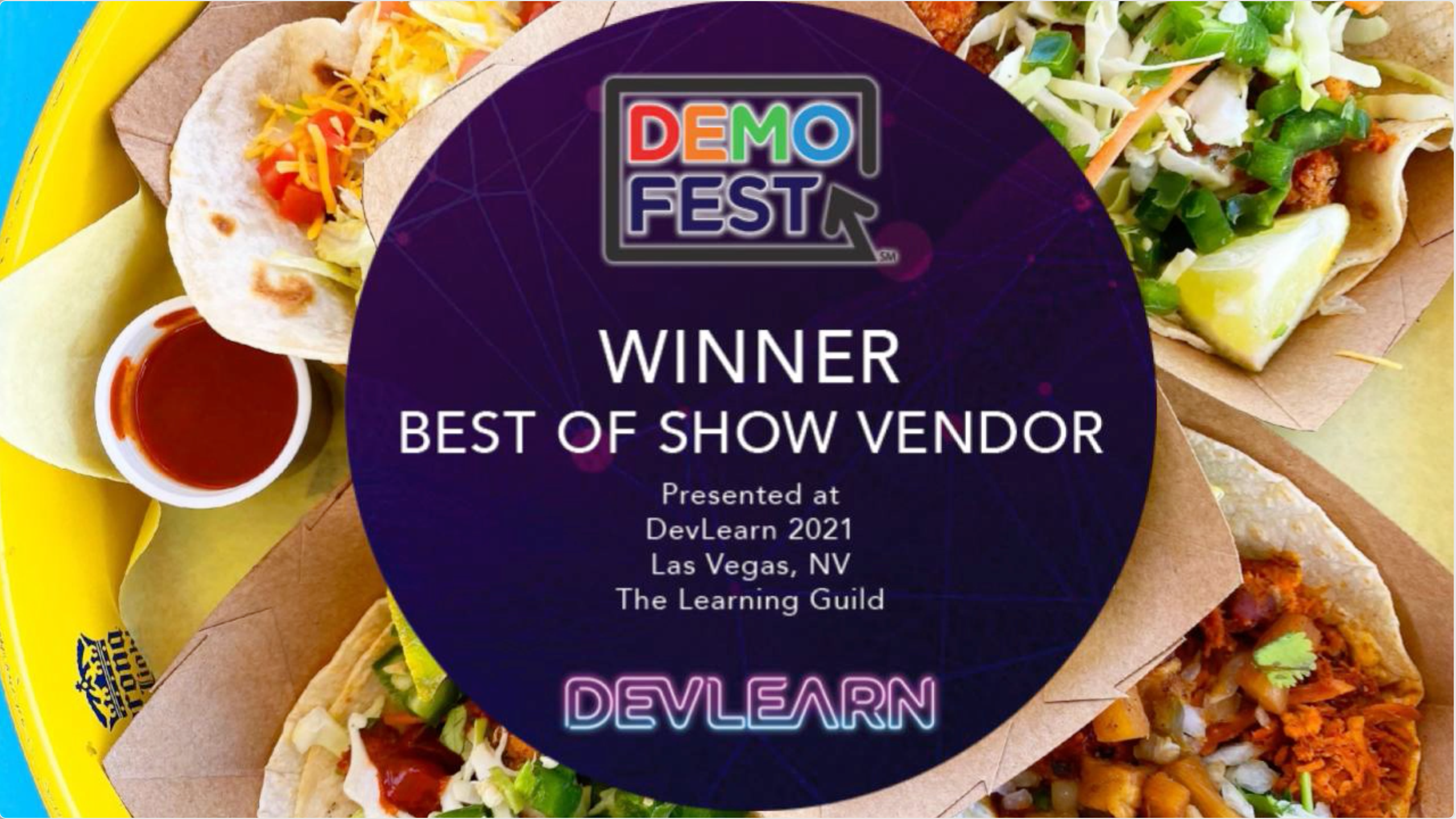 ABOUT THE GAME: The game is available to new hires as part of their onboarding learning journey and to practice throughout their tenure. Taco Builder utilitizes on demand practice of the entire taco menu that enables targeted learning and recipe simulation. Rusty Taco is already realizing the benefits of gamification:

ABOUT THE DESIGN: The Taco Builder Game was designed to simulate the make line at Rusty Tacos restaurants. So, I made the stations slide along the make line in Storyline.

Then, the state of the taco boat would be updated when learners dragged the correct food ingredient onto it. 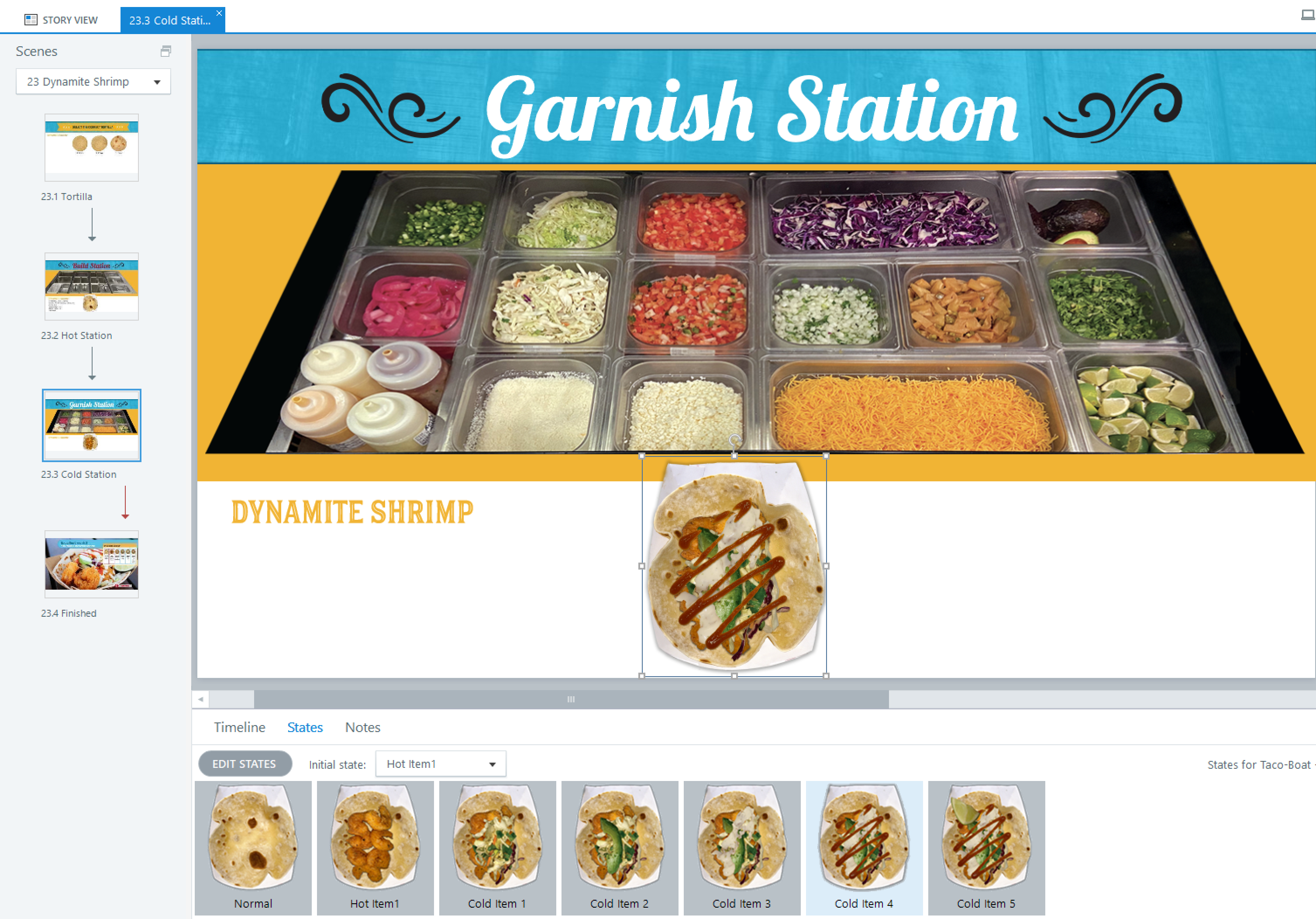 An initial problem was that photos of the tacos were taken freehand without using a tripod, or standard lighting, so that there was little consistency. The x, y, and z angles varied with each state of the taco build, as did the light and color levels.

To fix this problem, first, I made a clean boat image, as well as several basic versions of empty tortilla shells (corn and flour/ singles and doubles). Then, in Photoshop, I painstakingly recreated each state using ingredient photos, and applying lots of Edit/ Transform/ functions and Layer Styles within Photoshop. In this way, I was able to produce button states that were persistent enough to the eye to look natural as ingredients were added along the timeline. 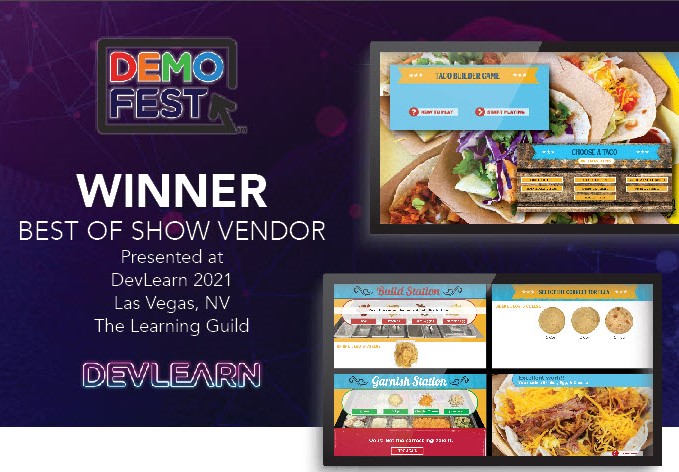